IMPACT OF CLIMATE CHANGE ON LIFE

We are finding, coaching and training public media’s next generation. This #nprnextgenradio project is created in in Tampa, Florida, where six talented reporters are participating in a week-long state-of-the-art training program.

In this project we are speaking to people to highlight the experiences of people whose lives are being affected by climate change.

Florida’s manatees experienced a record number of deaths in 2021. Climate change, pollution and other human causes killed more than 1,000 of these gentle giants. Central Florida environmentalist Cora Berchem is on the frontlines of preserving these iconic creatures, keeping close tabs on their numbers and helping to protect them from further habitat loss, displacement and life-threatening weather patterns.

‘They’re like family’: How one researcher is dedicated to preserving manatees

On a cool January morning, sleek gray manatees glide through the crystal-clear waterway of the Blue Spring run in Orange City, Florida. Pointing them out while drifting on a red canoe are Cora Berchem and her co-researcher Wayne Hartley, counting 52 sea cows.

“Manatees are just really a charismatic animal,” says Berchem, director of multimedia and a manatee research associate with the Save the Manatee Club. “I feel they don’t really get all as much attention as some other animals like whales and dolphins. People don’t know them all that well. But I’m just fascinated with them.”

Berchem is not only fascinated with manatees but also dedicated to preserving their numbers. Climate change has threatened the species in recent years, and a key part of Berchem’s research is assessing the effects of climate change on the manatee population—where manatees go and if they are in need of rescue. She also produces educational films and manages the club’s social media as part of its outreach.

Only an hour after sunrise, Berchem sports water shoes upon arriving at Blue Spring State Park, the same as yesterday and the day before. She walks up to the buoy line where the waterway meets the St. Johns River, dipping in a thermometer. Upon seeing the temperature of the river, she and Hartley head over to a research canoe nearby, pushing it into the water. 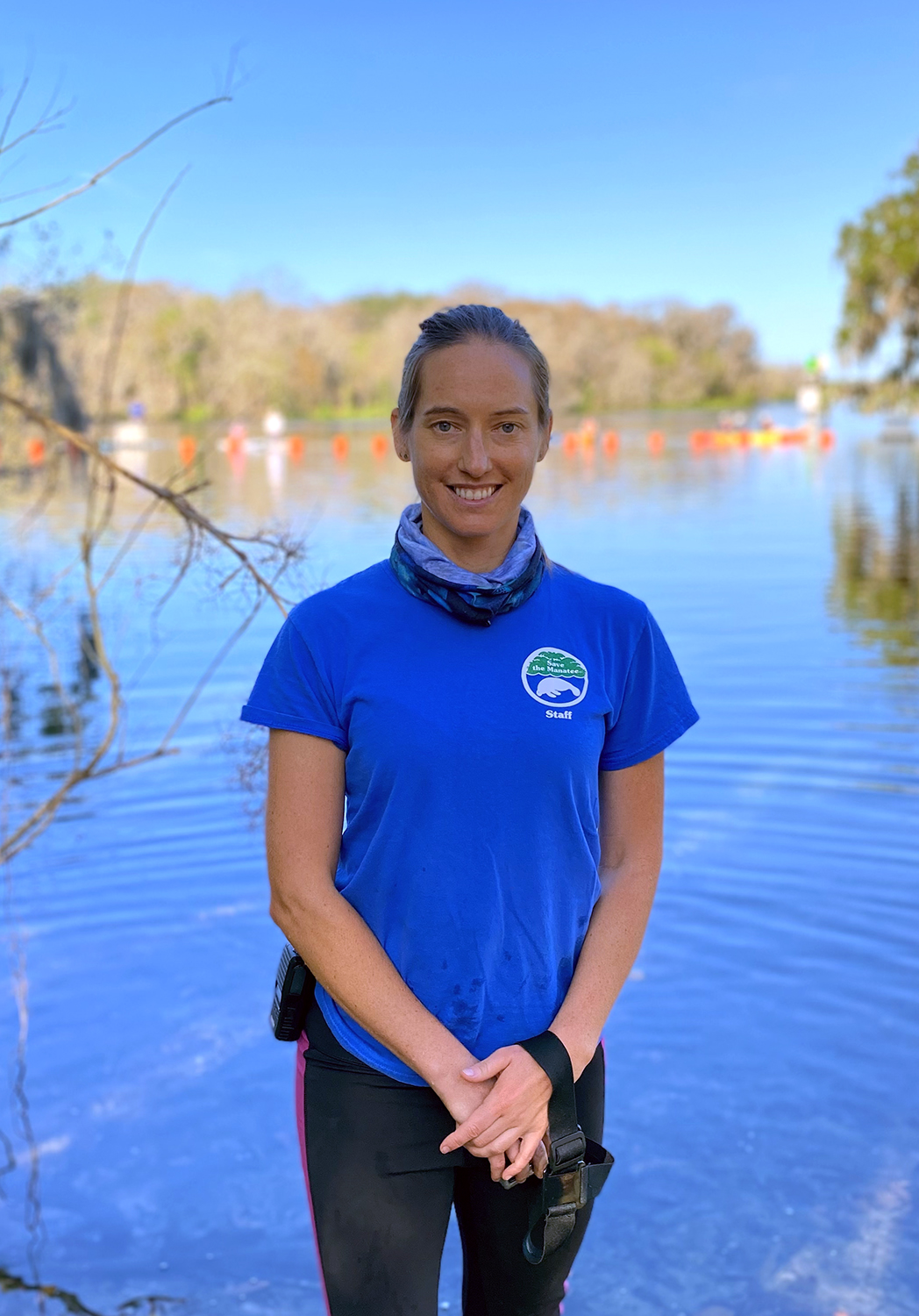 Environmentalist Cora Berchem arrives before 8 a.m. each day to Blue Spring State Park in Orange City, Florida. At the park, she performs a task essential to manatee research: hand-counting the sea cows in the waterway. (Photo by Shivani Persaud)

“It’s really important to keep count of the manatees because we want to see how the population is doing,” Berchem says. “We want to see what the survival rates are. We want to see the calf survival. This year we have over 70 calves, which is really promising, so we’re keeping a very close eye on them.”

Florida saw the highest manatee mortality rate in 2021, with 1,101 manatees dying through Dec. 31, according to Florida Fish and Wildlife Conservation Commission data. Such a number of manatee deaths is unprecedented, according to Berchem.

Manatees are quiet, docile indicators of the condition of the environment that they share with humans. Beyond that, manatees are important for other reasons. According to the Florida Fish and Wildlife Conservation Commission, they keep invasive species, such as water hyacinth and hydrilla, in check. Berchem says the sea cows help keep waterways open for boaters by grazing on aquatic plants. In addition, they help Florida’s economy by attracting tourists who come specifically to see them in their natural habitat.

Manatees enter the Blue Spring waterway from November to March to escape colder temperatures in the St. Johns River. However, Berchem says the numbers have been fluctuating, which is unusual for this time of year. After seeing over 500 manatees at once in early December, Berchem saw a sudden decrease to about five to 10 manatees only a few weeks later.

Rising water temperatures and levels, stronger storms and irregular weather patterns are results of climate change that threaten the manatee population, Berchem says. When manatees migrate too far out because of warmer waters, sudden temperature drops leave them stranded, where they can die from cold stress. Additionally, hurricanes and rising water levels can often move manatees inland or into a waterway with no outlet, also leaving them stranded.

“It warmed up so quickly that they’re leaving the spring and they’re going out into the St. Johns River to feed because there really is no food for them in the spring run,” Berchem says. “What I am concerned about is days like today, where it’s suddenly dropping, the temperatures are dropping overnight very quickly. And I feel because we’ve had very, very warm weather for the last two weeks … these manatees have migrated really far out, and I am a little concerned that they’re not making it back in time for the warm water.”

A manatee calf swims close to its mother, capturing the attention of park visitors looking into the shallow spring run. Keeping track of the calf survival rate is an important part of Berchem’s work, who said that 70 calves were counted in Blue Spring in 2021. (Photo by Shivani Persaud) 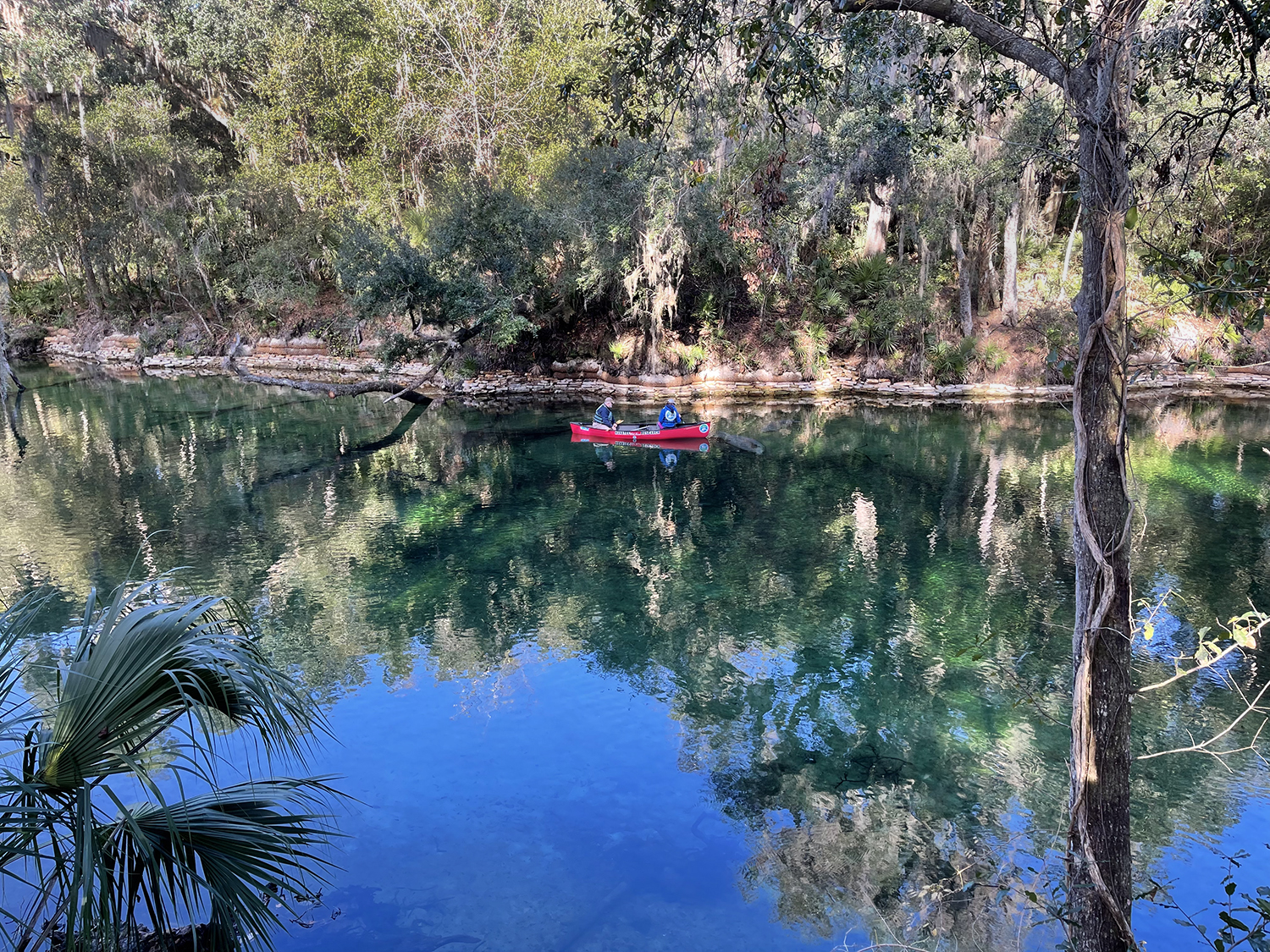 Berchem and her co-researcher Wayne Hartley float in a canoe down the Blue Spring run, pointing out each manatee that they see. The count can take anywhere from 45 minutes to two hours each morning, according to Berchem. (Photo by Rick Brunson) 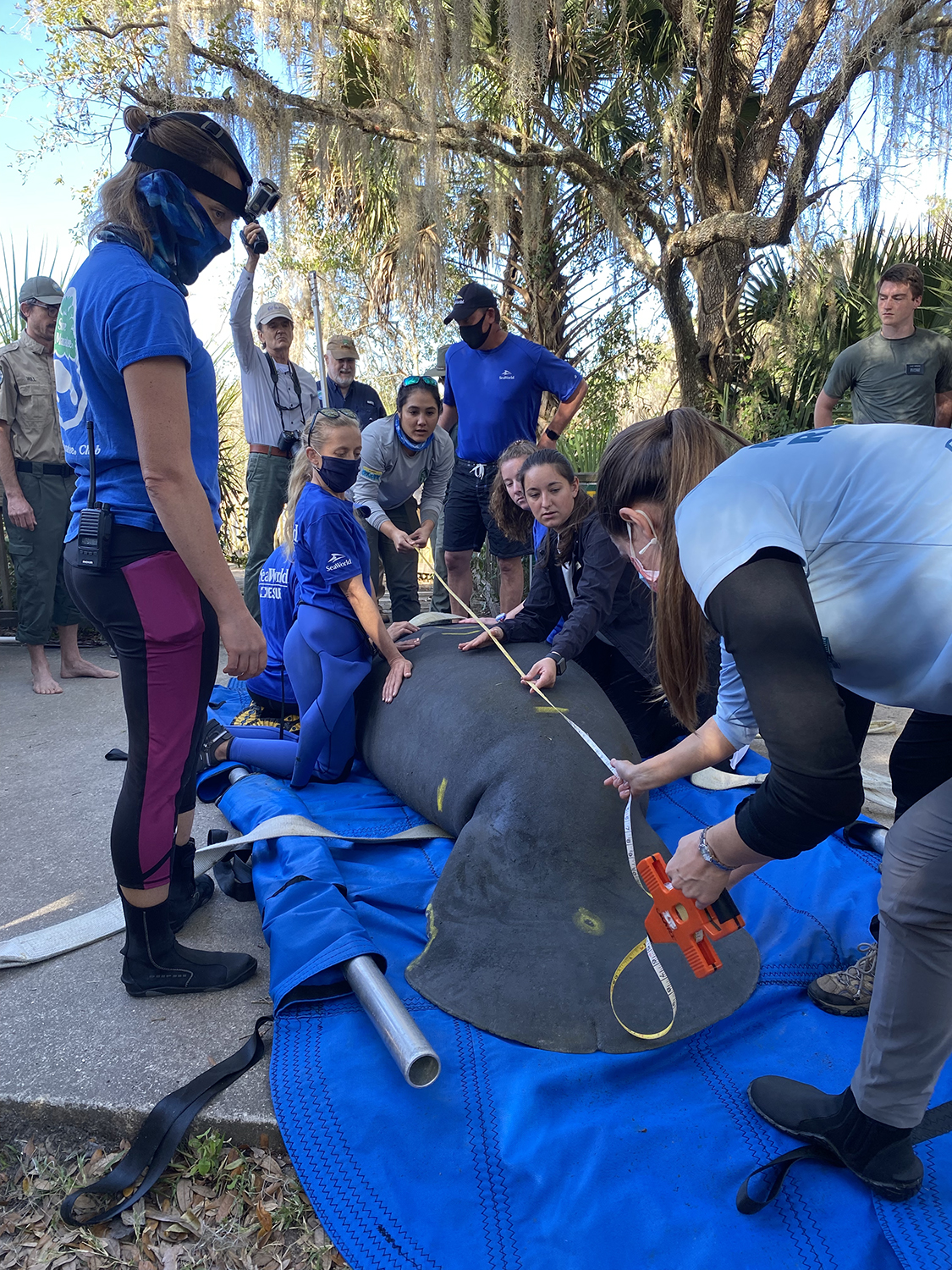 Blue Spring State Park gained a new inhabitant when Gibbs the manatee was released back into the wild by volunteers from SeaWorld and Save the Manatee Club. Her name is a reference to the ‘70s hit “Staying Alive,” because she continuously received CPR during the 97-mile drive from Welaka, Putnam County, to SeaWorld. (Photo by Shivani Persaud) 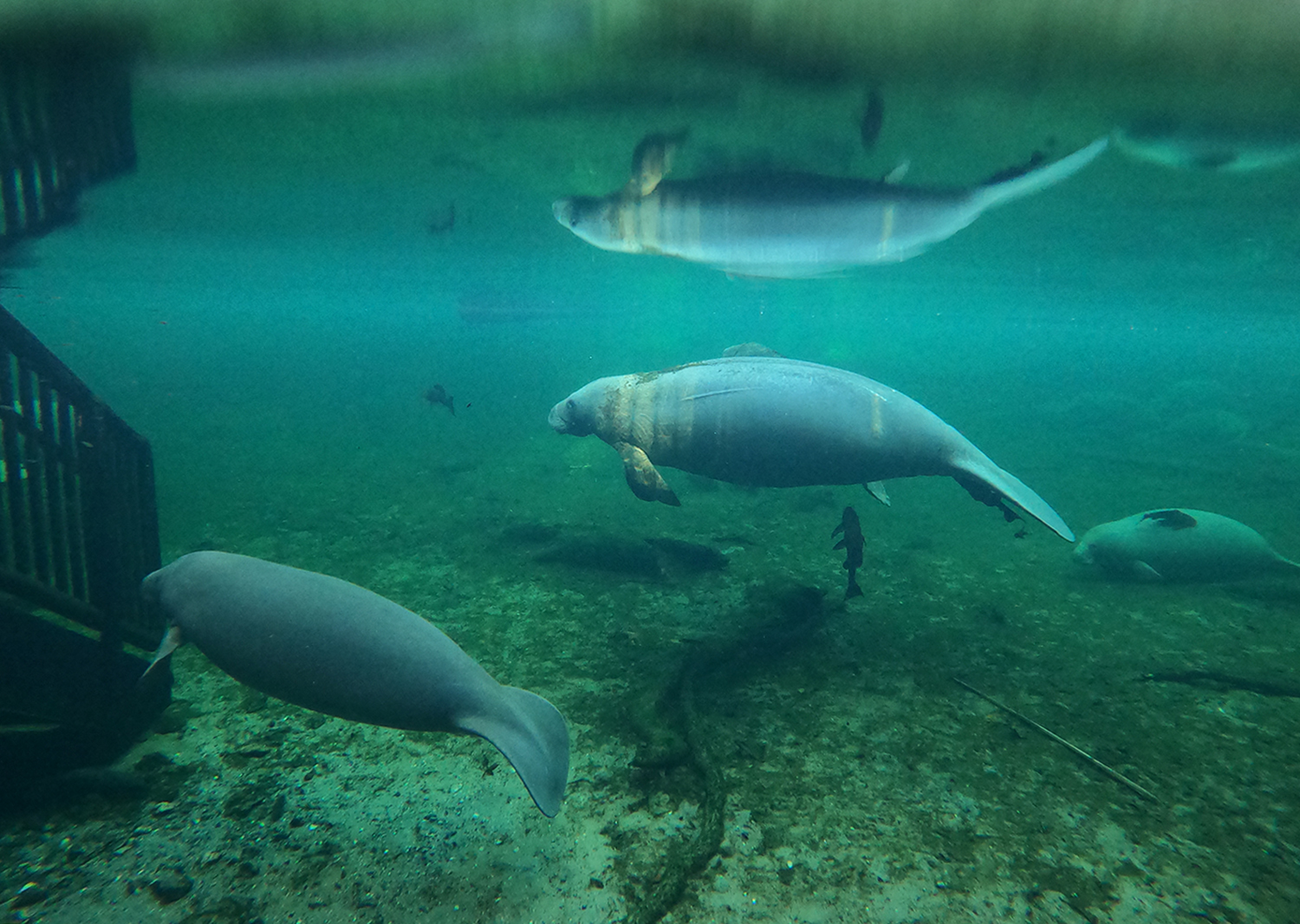 Manatees swim leisurely in the waterway at Blue Spring State Park in Orange City. The gentle creatures can hold their breath underwater for up to 20 minutes before coming up for air, Berchem said. (Photo by Shivani Persaud)

Moving from Germany to New Jersey and then Florida showed Berchem that climate change was not only a problem in Florida or in the United States, but globally. Berchem remembers when she was living in New Jersey in 2012, Hurricane Sandy hit the northeastern United States and severely affected people.

“People up there are not prepared for hurricanes like we are here in Florida,” Berchem says. “I’m confronted with harder hitting hurricanes and really shifting weather patterns. And then looking at Germany, for example, my family still lives over there. And last year, they had humongous flooding in the middle of the summer that literally wiped out entire towns.”

Unfortunately, climate change continues to affect Berchem’s work in Florida. In the eight years that Berchem has been working with manatees, she has participated in numerous rescue missions throughout the state of Florida.

“We literally had to rescue anywhere between five and 50 manatees out of areas that they really wouldn’t have gotten into if it hadn’t been for very strong storms,” Berchem says.

Saving the manatees and preserving their population is more than simply protecting wildlife. To Berchem, these gentle creatures have become like family. Berchem and Hartley name the manatees that they count in the Blue Spring waterway not only to identify them, but to humanize them.

“Every year when we start doing the counts in November and you see all these manatees coming back, it’s like your family coming home for the holidays, or seeing your friends,” Berchem says.

Getting a call to recover a manatee carcass can be emotional, Berchem says, and makes her wonder which one of her aquatic friends was no more.

“You don’t want to see any of them, but it’s especially heartbreaking if it’s one of the ones you’ve really known very, very well for years,” Berchem says. “It’s more than just counting numbers and counting animals and putting them into a database. It’s really more personal than that.”