IMPACT OF CLIMATE CHANGE ON LIFE

We are finding, coaching and training public media’s next generation. This #nprnextgenradio project is created in in Tampa, Florida, where six talented reporters are participating in a week-long state-of-the-art training program.

In this project we are speaking to people to highlight the experiences of people whose lives are being affected by climate change.

Kathy Guindon, who has a doctorate in marine science, is the director of the Suncoast Youth Conservation Center, in Apollo Beach, Florida. Her goal is to focus on creating hope for the future by teaching children about the value of the environment. She hopes that by teaching children to conserve resources and look for solutions to combat climate change, the state’s natural ecosystem will thrive.

‘Focus on hope’: How a marine biologist teaches youth about Florida’s changing climate

Listen: 'Everything is connected.'

Stepping through the mud to the shoreline, Kathy Guindon leans down to pick grass from the marsh like it’s a normal part of her day, because it is. She spent her childhood outdoors, learning to appreciate and cherish the natural environment. Now after almost 27 years working as a marine scientist, she’s on a mission to instill that same feeling in today’s youth.

Through their programs, the Center has also developed field trip plans for teachers to use that match the state’s educational standards and allow Guindon to introduce children to the importance of conservation.

“What we try and focus on here is just instilling in them that intrinsic value of our habitats and of the fish and wildlife resources… teach them how to interact with the fish that they’re catching. Or with the wildlife they’re observing when we kayak through the mangroves,” Guindon said.

She said that by having children of all ages interact with nature in a safe, fun and educational way, she is able to teach the value of protecting the environment and resources that need to be preserved to have an effect on climate change. 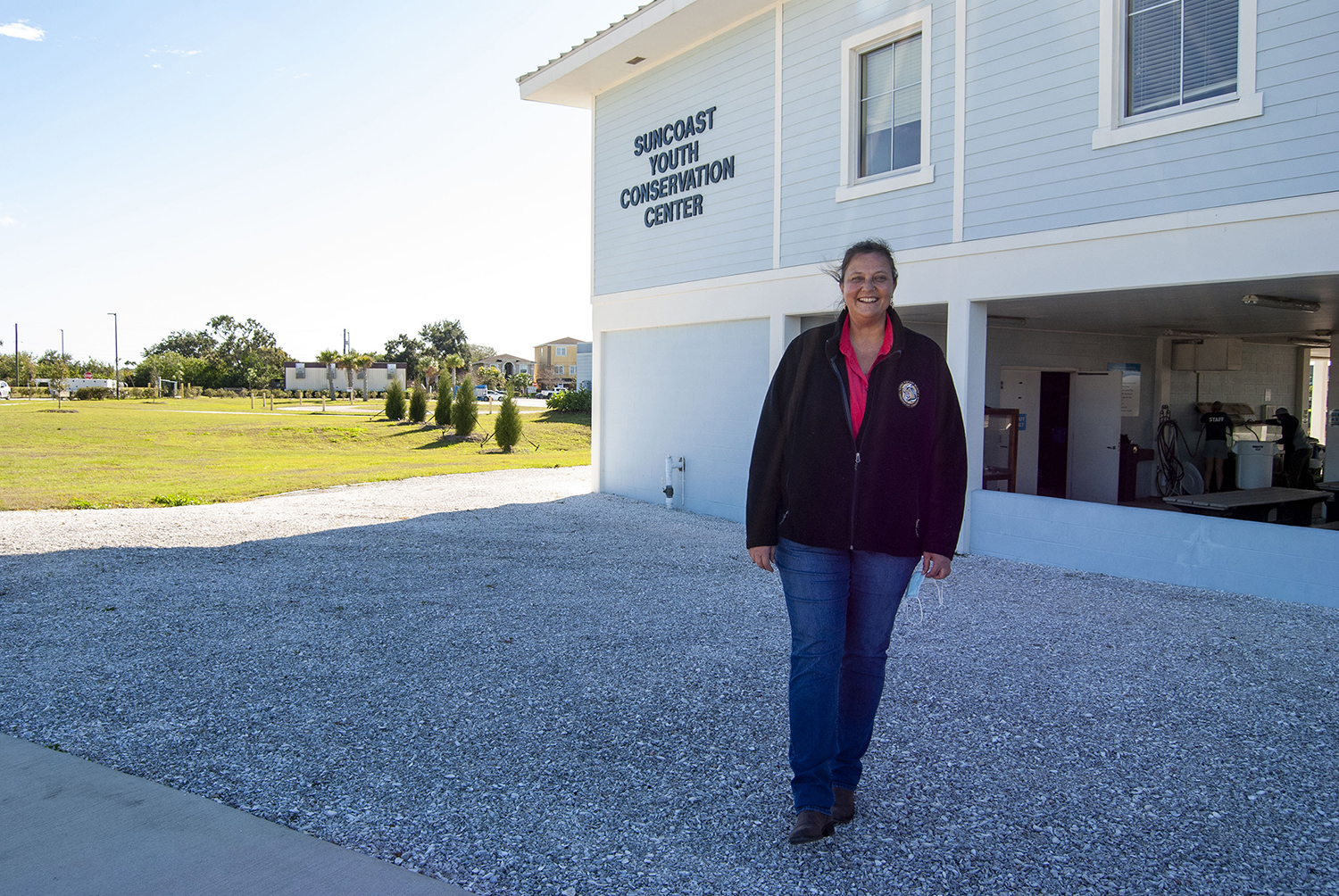 Kathy Guindon has been the director of the Suncoast Youth Conservation Center since it was first established. She has worked diligently to develop the program and takes pride in her work. (Photo by Lily Theisen)

One of the most significant impacts on the environment that stood out the most to Guindon during her career was when one of her professors at North Carolina State University pointed out that if she wanted to see the Florida Everglades, she should probably go right then because within her lifetime the Everglades would be underwater. That’s what led her to work with the Florida Fish and Wildlife Conservation Commission along Tampa Bay.

Guindon is alarmed by Florida’s disappearing wetland habitats—something she’s seen in her own neighborhood and experienced while working in conservation—as more seawalls are built and less marsh grasslands remain.

“Early on in my career, I worked on a project that looked at the effect of fish communities on seawall habitats versus mangrove habitats, and it was then that I noticed there is quite a difference in the marine community of fishes and invertebrates that you can find, and how important those natural shorelines are relative to just the seawall,” Guindon said.

To prevent the disappearance of wetlands from sea level rise, Guindon is working on a conservation project that will restore the berm on the shoreline of the property where erosion has taken place. This also creates an educational opportunity for the children who visit. 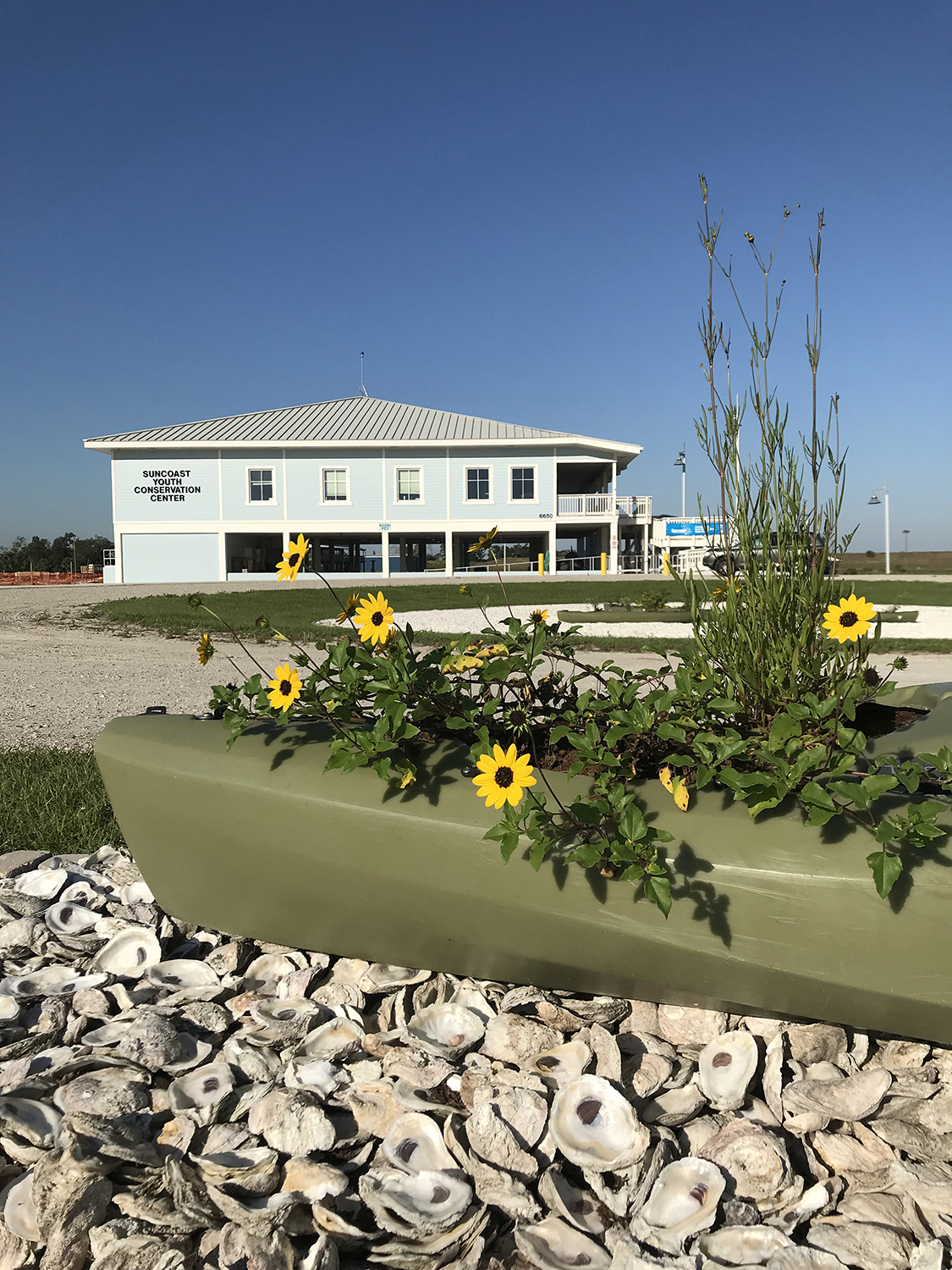 Recycled oyster shells, native Florida plants and a repurposed kayak sit at the entrance of the Suncoast Youth Conservation Center welcoming guests and sets the stage for what the center is all about. (Photo courtesy of Kathy Guindon)

Restoring the raised strip of land will not only have a positive impact on the wetlands by creating a separation between the water and the grasses, it will also create a space to help educate future visitors about the impact of seawalls on Florida’s wetland habitats.

Guindon said that when the project is done, there will be examples of color-coded seawalls along the berm. The walls will include one made with concrete, one made with large rocks, and one created with oyster shells to show how each different seawall impacts the shoreline. 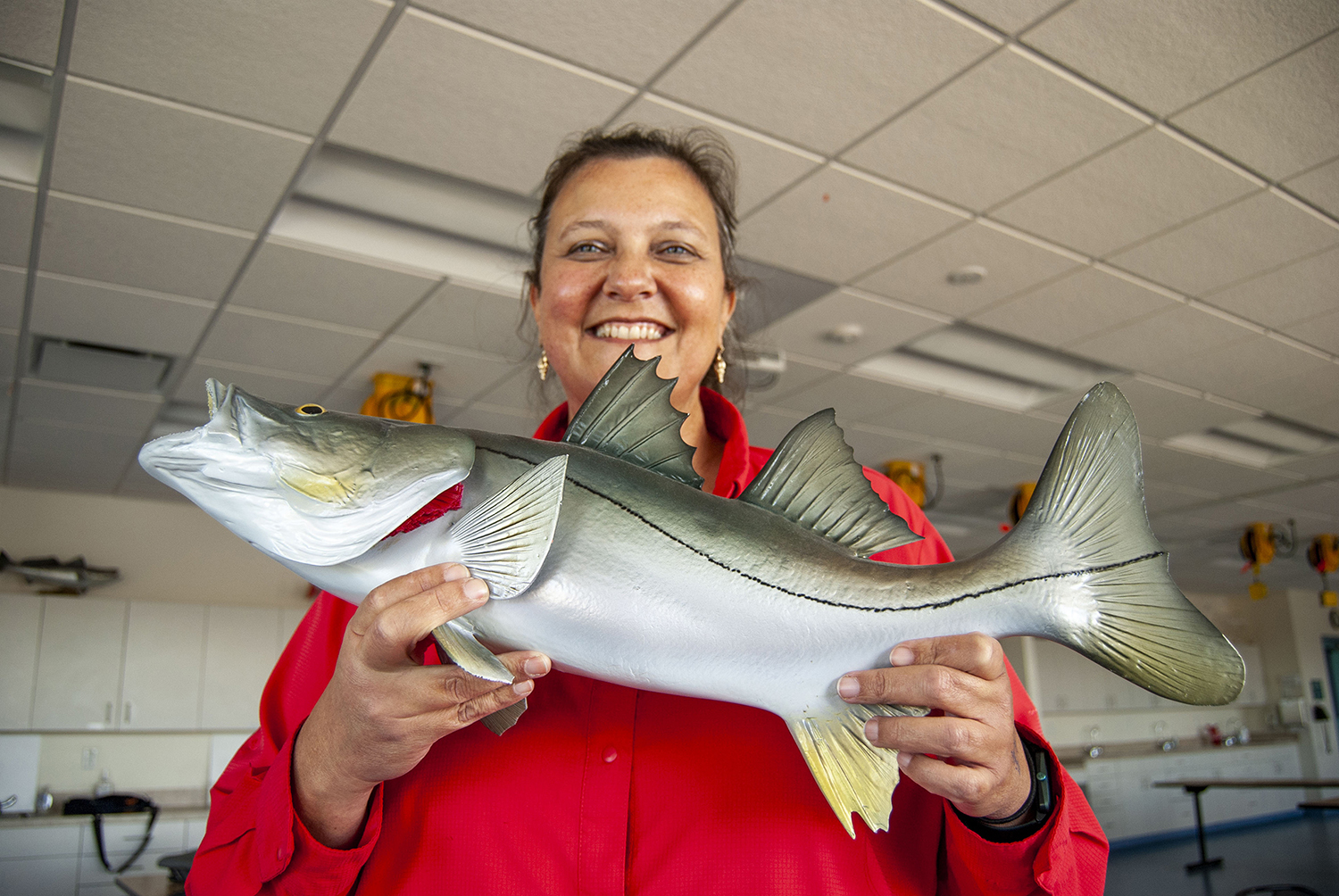 Kathy Guindon smiles holding a Common snook model, one of her favorite species to fish. Due to warming waters, the Common snook have started to populate outside of their usually found waters and Dr. Guindon enjoys being able to find the fish in different areas. (Photo by Lily Theisen)

“These oyster bags that are over here are going to go out as another example, where actual living things can come in and settle on the shell, instead of having it just be of that vertical concrete wall,” Guindon said.

The oyster shells are a conservation project on their own because they are recycled from two restaurants in St. Petersburg, Florida, just across Tampa Bay. Guindon said that the natural oyster shell is a great material for marine and aquatic life to settle on and will be used to show the children what happens as the aquatic life settles.

Hands-on learning opportunities like restoring the berm along the shoreline are exactly why Guindon enjoys working in conservation. Projects like this allow her to use her passion for the ocean to teach and encourage today’s youth to become future stewards of the environment while combating climate change.

“I don’t like to get pessimistic,” Guindon said. “I like to focus on the hope for the future, so that moving forward, we can do what we can to help protect and conserve in a sustainable way those natural resources around us.” 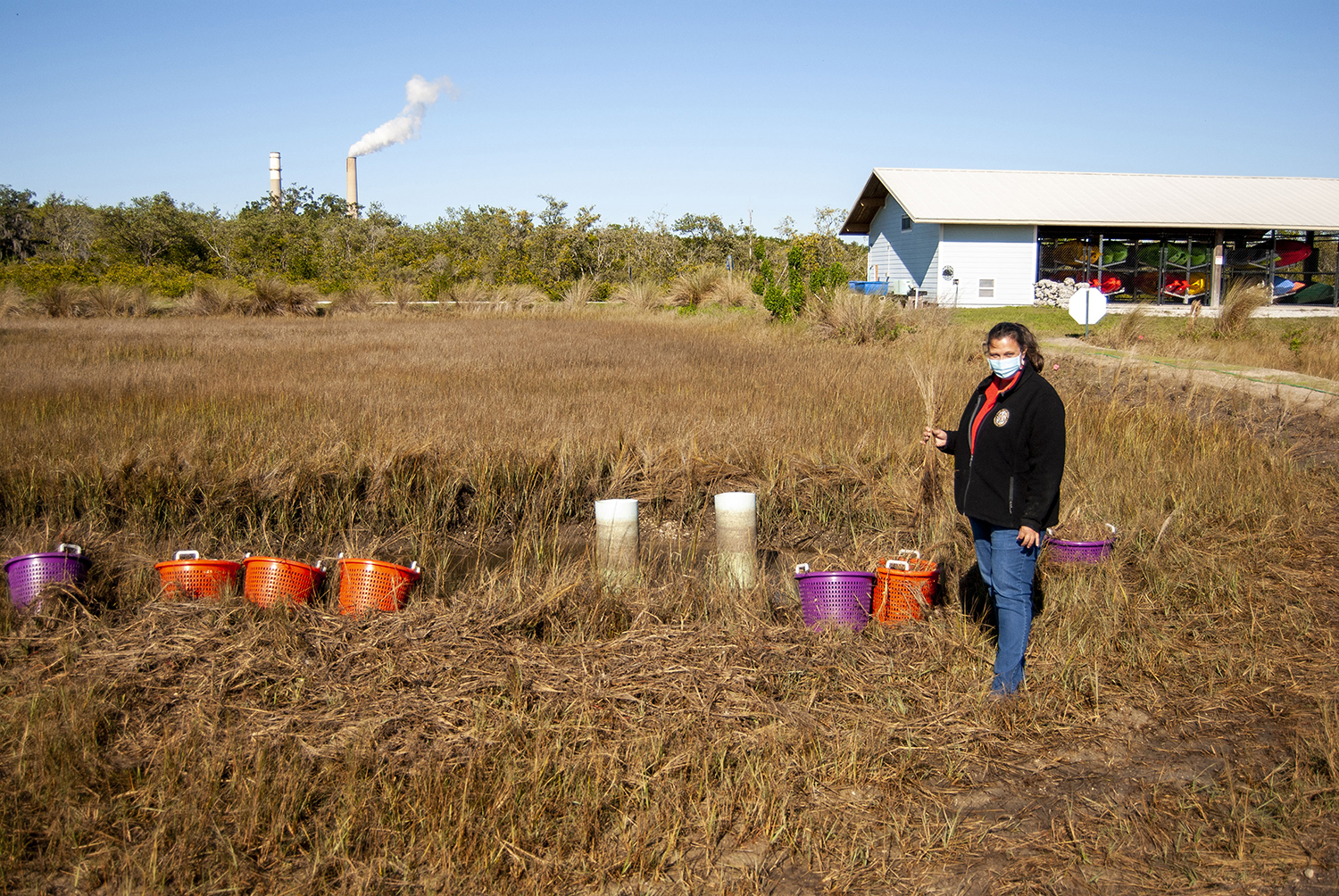 Kathy Guindon stands on a newly restored berm. To begin the berm restoration project, volunteers picked all the grass along the shoreline to be saved and replanted once the land was re-elevated. (Photo by Lily Theisen)